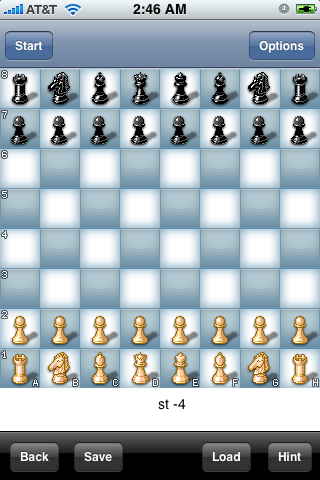 This is for you Grandmasters. The game play feels sleek at higher difficulty levels. For those who think Caissa can really defend herself well. I can beat her at -4 9 out of 10 times and at -3 i can make it to the draw every other time. Month ago, I felt inadequate too :)

Exchange like crazy. She gets less wise with less pieces on the board.

This one is for Armadillo and Eurisko. Your turn gents :)

There were many internal changes, that shouldn't affect your gameplay experience and will not have any visual effect for now, but it is foundation for many new things. They will fix some exotic bugs, like you can castle with rook that was moved and put back if you save/restore between move and castling.

IMPORTANT: This release will wipe out your saved game and preferences, due the the refactoring of the preference system. Not much to loose, but I warned you :)

If you have 0.82 or earlier. Please uninstall the app via Installer.app and install again. It is very important. Uninstall & Install as the opposite of just Update.
Update You should uninstall caissa.us source if you installed Caissa from Ste resource. That will fix loop update problem. Thanks _BigBoss_ for the tip.

Note: See TracWiki for help on using the wiki.